I get asked a lot if I have had any strange food cravings.

The only thing strange my cravings is that I have them. Pre-pregnancy, I rarely craved food. I ate out of necessity.

At the beginning of my pregnancy, I was always hungry and craving various things. 20 weeks into my pregnancy, I’m always feeling hungry but my cravings aren’t as frequent. Can you imagine how terrible it is to be hungry but not sure what to eat because you’re not craving anything? Let me tell you! It’s torturous! Luckily, I’m happy eating most things because it placates any hunger I’m feeling.

When I get cravings, it’s usually for cheeseburgers or tacos from either Taco Bell or Jack in the Box. Which is funny because I didn’t like eating beef pre-pregnancy. The downsize to having these cravings is the indigestion that follows. I’ve had many uncomfortable sleepless and uncomfortable nights! You’d think I’d learn after the first few times! Unfortunately for me, it’s really hard to resist the craving when I have them!

I never ate chocolate cake before. I didn’t eat cake in general. If I’m feeling pressured to take a slice of cake at a party, I’d usually opt for a vanilla flavored cake. Chae would sometimes want me to eat a piece of his chocolate cake and I’d take half a bite just so that he’d leave me alone. I’m not a cake person!

However, at my nephew’s birthday party at the beginning of May, I had taken a half bite from Chae’s chocolate cake and it tasted AMAZING! I made him grab another slice for me because I didn’t want to share!

I went to New Orleans over the weekend for my good friend Tina’s Bachelorette party and had ordered a Brownie a la Mode for dessert and it was heavenly! Who knew chocolate cake could taste this good!

As I’m typing this entry, I’m snacking on chocolate Oreos! haha So yummy!

Which reminds me, I also get cravings for milk. I never drank milk before because I didn’t like how it tasted, but now I really enjoy drinking it!

To sum it up, no strange food cravings but I do have cravings for tacos, cheeseburgers, chocolate cake, and milk 🙂

Before I end this entry, I wanted to share a photo I took this morning with my husband cradling my pregnant belly while he was still sleeping. It’s so adorable and needs to be shared! 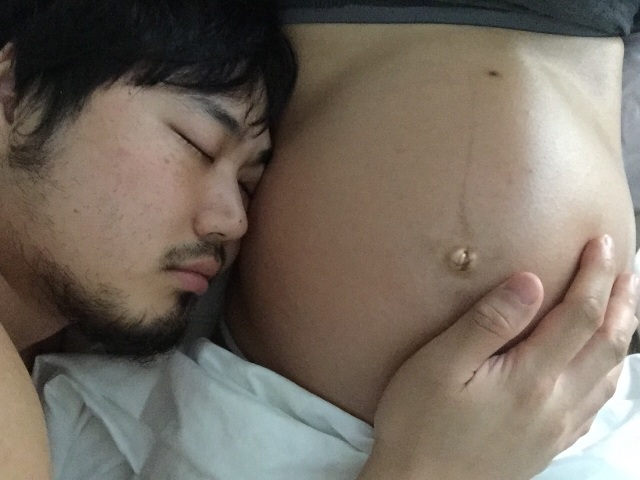 Until next time, namaste!

The cutest thing happened last night. One of our babies kept “kicking” me when I was laying in bed. I put “kicking” in quotes because it might not have been kicks. She/he could be hiccuping, turning, or something else entirely! It felt like a little pop on the lower left side of my belly. I usually feel one or two “kicks”, but this time it was eight or nine “kicks”! 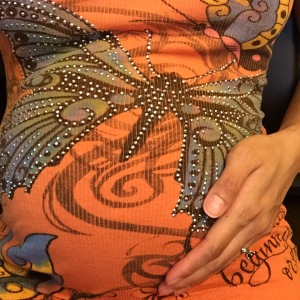 Above: The movement was coming from here.

Chae wanted to get in on the action when he heard all of my commotion. He replaced my hand with his and waited. I felt the pop but he said he didn’t feel anything. “I think the baby has gone back to chill mode,” he told me.

I felt another pop. “There, it happened again. Did you feel it that time?”

He said he didn’t so I readjusted his hand on my tummy. He was probably in the wrong spot.

He jumped back with a “Whoa!”

Haha, it was the cutest thing!! I put my hand back on my tummy and waited for more pops. Sure enough, the baby kept on moving.

After enjoying a few more pops, I decided I’ve had enough excitement for one day and settled into bed for some much needed sleep! More pops could have been going on while I was sleeping, I will never know!

Today was the second day of Comicpalooza and my energy level was not as high as yesterday. I lasted twelve hours at the convention yesterday! I didn’t make it through the whole day today. I left the house at the same time as yesterday but left five hours earlier than yesterday. I was tired, my legs were sore, and I wanted to lay down. There was no need to push myself any further today. 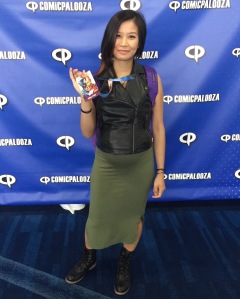 Above: First day at the convention.

I had felt the twins move when I sat down to eat my lunch. The movement was near the top of my belly. I felt three “pops” and then things settled down. I’m excited to finally be able to feel them moving more frequently! 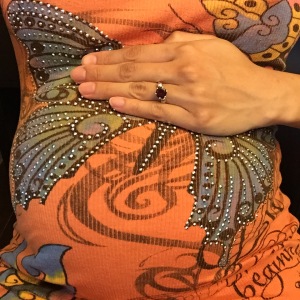 Above: The movement was coming from here.

Also, I think they’ve gotten large enough to “sit” on my bladder. I was walking around the convention when I suddenly had a “funny feeling” in my bladder. It felt like it was being pressed on. It was uncomfortable, but not painful. It also made me feel like I needed to use the restroom. Luckily, I had emptied my bladder right before this happened, so I knew I didn’t need to pee. I wiggled a bit and placed my hands under my belly to support it. The wiggling was meant to readjust the babies positions inside of me. The pressure on my bladder went away. When I let go of my belly, the feeling slowly returned. This had to mean that the babies are sitting on my bladder!

So, what did I do? I walked around holding my belly. I have never felt more pregnant and I loved every moment of it!

There was an error retrieving images from Instagram. An attempt will be remade in a few minutes.